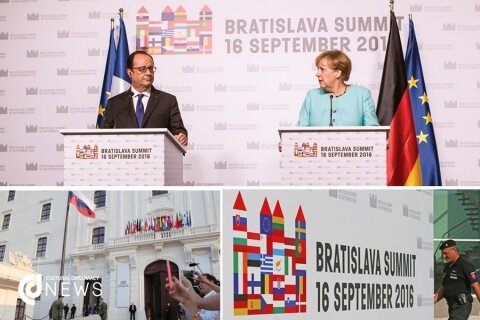 Friday the 16th of September was a big day for Bratislava. On this day, leaders from all 27 members states of the European Union, apart from the United Kingdom, met for an informal summit at the Bratislava castle to discuss the start of the so-called ‘Bratislava Process’, as part of Slovakia’s six-month rotating Presidency of the Council of the European Union.

As part of its current presidency, Slovakia invited all European leaders to an informal summit in Bratislava. This summit represents the start of the so-called ‘Bratislava Process’, which will continue in Malta and Rome in the spring of 2017, during celebrations for the 60th anniversary of the signing of the Rome Treaties.

During the summit, leaders discussed topics such as security, migration, and the EU post-Brexit. Discussions were also focused on bringing Western and Eastern EU member states closer together, by finding compromises so that the EU can move forward more united.

Holding an informal summit in a European city other than the ‘EU Capital’, Brussels, is a way to bring the EU closer to its citizens and provide a space for leaders to discuss in a more relaxed manner than during formal summits, where important decisions have to be made.

The logo of the Bratislava summit, the silhouette of the Bratislava castle created from the flags of all 27 states of the EU, is indicative of its unifying aims. 343 delegates registered for the summit, as well as 1350 journalists, including foreign journalists from 67 countries such as the U.S., Japan, Brazil, China, Cuba, Mexico, Iraq, Armenia, China and South Africa.