Ethiopian Olympic Runner Calls on U.S. To Push for Human Rights in His Country 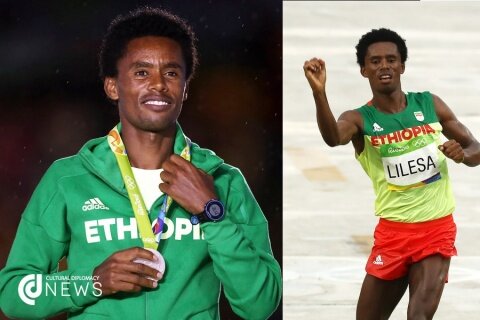 Feyisa Lilesa won the silver medal for Ethiopia in the marathon at last month's Rio Olympics. Last month, he was in Washington to call for the U.S Congress to take action in solidarity with Ethiopians protesting against their government.

“I know that Americans are peace-loving people. My people are also peace-loving people, but they have been denied peace for a very long time”, he said in his native Afaan Oromoo at a news conference on Tuesday at Capitol Hill. “People are calling for the freedom, democracy that you have here. We want the same things, and I call on the U.S. government to urge the Ethiopian government to make sure that democracy prevails in Ethiopia.”

As Lilesa approached the finish line of the Rio marathon, he crossed his wrists as a sign of protest. This attracted worldwide attention. He is part of Ethopia’s largest ethnic group, the Oromo, and he made the symbol in solidarity with Oromo protests that have occurred in Ethiopia since November over issues including land rights and fair representation in government.

"Crossing my wrists in Rio has already had a great impact on my life", he said. "I am now separated from my dear mother, my supportive wife and my precious children in Ethiopia who I miss dearly".

Other athletes have followed up Lilesa’s move. Ebisa Ejigu crossed his arms in the Quebec City Marathon in Canada, and Tamiru Demisse, an Ethiopian paralympic runner, did the same as he won his silver medal in the men’s 1,500 meters for the visually impaired at the Paralympics in Rio.

Lilesa, in the U.S. on a temporary visa, said he was figuring out his future but was not seeking asylum in the U.S.