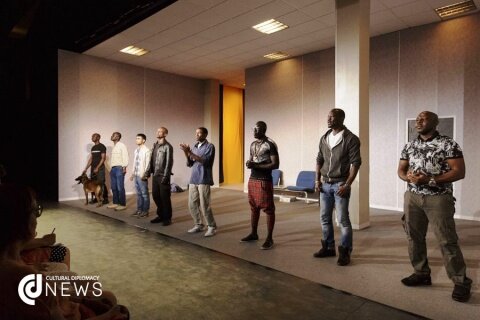 Created in 2014 by Olivier Coulon-Jablonka, Barbara Métais-Chastanier and Camille Plagnet, ‘81 avenue Victor Hugo’ gathers the testimonies of eight men from Africa about how they escaped their countries to find peace in Europe. After being created and played in Seine-Saint-Denis, it is now being presented at the Théâtre des Abbesses in Paris.

‘81 avenue Victor Hugo’ is not only the title of the piece but is also the name of the collective fight to regulate the situation of illegal migrants in France. It was created in 2014 in the suburbs of Paris and now has over 90 members, who are both African refugees and French citizens. The theater piece is a tool of communication for the collective, which aims to spread their message and reach as wide an audience as possible.

It is an unusual way to speak about such a delicate topic. The issue of illegal migration is one of the most covered topics in national and international media, but it is mostly seen as a political problem. ‘81 avenue Victor Hugo’ aims to turn the attention of public towards individual human beings so that neither side is persecuted in the difficult situation.

The staging is simple: the only decoration is a representation of a hallway in the squat at 81 avenue Victor Hugo in Aubervilliers. All of the eight people tell their stories, yet this is not just a simple gathering of separate monologues, but is rather a dialogue between them. In this way the director, Olivier Coulon-Jablonka, wanted to address the audience without directly accusing someone.

‘81 avenue Victor Hugo’ will be played at Théâtre des Abbesses until September 17th. From October 18th it will be presented to a wider audience in the whole region of Ile-de-France.