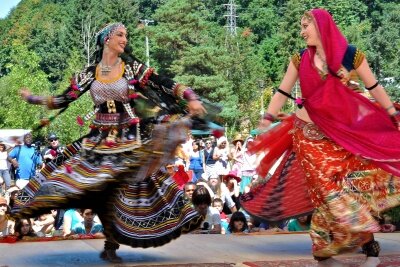 The Roma people are estimated to be around 15 million, although exact population estimates vary because there is no official or reliable count of the Romani population worldwide.

The discrimination that Romani people have faced has lasted for far too long now, with persecutions that saw them being enslaved, as well as being victims of the genocide perpetrated by the Nazis during the Holocaust. Nowadays, discrimination against the Romani people continues mostly because of prejudices that have been associated with them for example, poverty and criminality.

For these reasons, Andrijano Dzeladin, a young Roma of Macedonian origin, founded Sutka City TV in 2012. It is the first Roma TV channel in the world which is entirely in the Romani language. His aim is to show the culture and traditions of his people, breaking down prejudices and promoting the true face of the Romas, who are often at the center of controversies and critics.

The channel got its name from Sutka, one of the ten municipalities of the Macedonian capital, Skopje, and where Andrijano grew up. Every day he runs his cultural broadcast from a two-roomed flat located in Paris. For the majority of the day there is a flow of culinary programs and music videos, as music plays an important role for Romani people, they express their culture and their history through melodies and dance. In the evening, the young Roma receives calls from the audience and discusses various topics with them.

Despite the difficulty in finding sponsors for Sutka City TV, Andrijano won’t give up. He continues to work on his dream of bringing his small television station to every nation, breaking the many prejudices of Roma culture and in doing so, achieving the goal of encouraging greater Romani integration.