The French and German Embassies in Ireland Support Freedom of Speech

The annual conference of the NPHFI took place at the end of November in Dublin, exploring the question of freedom of speech in times of conflict 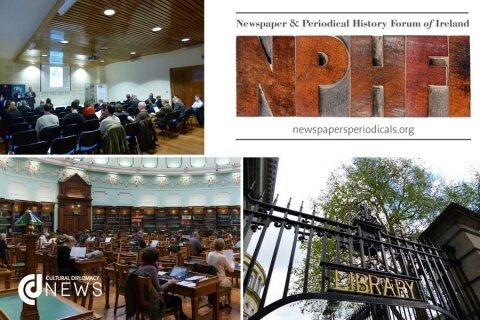 The Embassy of France in Ireland and the Embassy of the Federal Republic in Dublin, with the support of the Goethe Institut, organised the ninth edition of the Newspaper and Periodical History Forum of Ireland (NPHFI) annual conference, hosted by the National Library of Ireland in Dublin on Friday 25th and Saturday 26th November 2016.

The Newspaper and Periodical History Forum of Ireland was born as a network concerning past and present journalism, and it benefits from writers, researchers and academics. Every year it organizes a conference that brings together relevant speakers, covering different topics in the field of newspaper, periodical, journalism and printing history.

This year the theme was ‘Freedom of Speech in France, Germany, and Ireland in Time of Conflict’, a topic that appears to be particularly interesting, considering the current issues and controversies raised in Europe. An emblematic example were the Charlie Hebdo attacks, but the issue of free speech has been important throughout history.

The event was opened by the chairman of the NPHFI, Mark O’Brien. The interventions covered many different topics: the censorship, both made by the press and by the journalist itself; satire and caricature in the three key countries of the conference, France, Germany and Ireland; the press and the journalism during wartime; and the conflict within the world of journalism.

Among the various relevant speakers were three keynote names. Pr. Hugh Gough, emeritus professor of history at University College Dublin focused on liberty and license, specifically regarding the political press in Europe from the Enlightenment to the age of mass journalism. Another keynote speaker was Dr. Pascal Dupuy, professor at the University of Rouen, an expert of the French Revolution, who talked about the role of the cartoonist during the First World War. Last but not least, Dr. Andreas Strobl, Senior Curator at the Staatliche Graphische Sammlung München, whose intervention title was ‘‘The First Casualty When War Comes is Caricature’. The German Simplicissimus during World War I’.