Tio Mago Goes a Long Way From Manhattan to Medellin 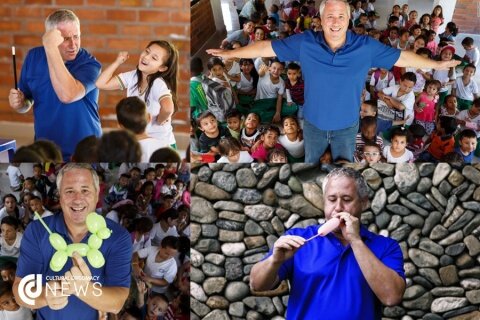 Former Wall Street banker Andrew B. Stein is the founder of the Orphaned Starfish Foundation, an organization which works with orphans, victims of abuse and vulnerable youth. Andrew Stein founded the humanitarian organization in 2001 with the aim of developing projects to enable children and young people to escape the streets, promoting vocational skills like computer technology and helping them to gain employment.

Andrew Stein is also known as ‘Tio mago’ – Uncle Magician - since he brought magic to the streets of Medellin and other Latin American countries. The foundation started with a small amount of computers in a humble building in Santiago de Chile. Over time, the organization has grown bigger and it has now over 9,500 children in 46 programs across 21 countries.

During his yearly visits to each one of the Orphaned Starfish programs, ‘Tio Mago’ put on a magic show for the children with balloon animals and magic tricks. All the programs are created to raise awareness about the issues of poverty and development worldwide. According to Stein, magic is a tool to make the children feel like they have the ability to do anything in the world.

For 25 years, Andrew Stein exercised trade in the banking industry to help finance scores of infrastructure projects in Latin America and in Asia.

Education seems to be the key to help keep young girls and children away from prostitution and from the streets. The nuns in Chile told Andrew Stein the true story of what is happening in these countries when girls are leaving their homes and ending up on the streets.